Save more money on Meat

You can usually get the most meat for your buck through purchasing it at Sam's Club or Costco, but I want to tell you about how to you can make that meat for cheaper and last longer.

The first thing I do when buying meat at Sam's is divide and freeze it. About once a month I buy 4 lbs of ground turkey (Shane likes it better than ground beef), whole chickens, and a pack of steaks or pork chops. When I get home, I divide the ground turkey up into 8. I put 2 of the 8 sections into ziplock bags and freeze them. Then I cook the rest with some onion, salt, pepper, and garlic in a skillet until brown. I then re-divide the meat, bag it, and stick it in the freezer. I cook some of the ground turkey in order to make some meals like spaghetti and nachos a little more instant on late nights or when I'm just cooking for 1. For steaks and pork chops I pack each individually in sandwich bags, then freeze.

Why I buy Whole Chickens...
(don't read if you are a vegetarian or grossed out by meat)

Up until this month, I have been buying a bag of frozen chicken breasts. With some research, it dawned on me that I could buy whole chickens instead and get more bang for my buck! So I bought the heaviest pack of 2 Tyson Chickens I could find for $0.89/lb (chicken breasts are sold at $2/lb), brought them home and cut them up... 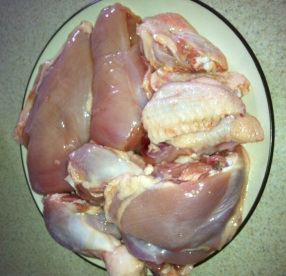 I ended up with 4 chicken breasts, 8 wings/ winglets, 4 thighs, 4 drumsticks, and some meat left on the body. I individually bagged and froze the pieces I cut, but took the remains and threw them in a crock pot with some chopped up onion, garlic, salt, and pepper and cooked on the high setting for 4 hours. 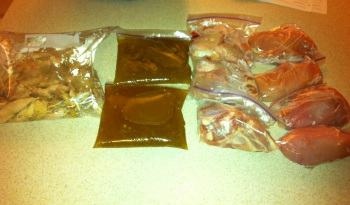 I hand pulled the cooked meat off the bones and put it all in a ziplock bag. Last but not least, I had 8 cups of chicken broth to bag! So in conclusion I was able to take 2 whole chickens and get breasts, wings, thighs, drumsticks, about 1 lb shredded meat, and enough chicken broth for at least 2 meals! That's over 8 (each breast is about 1) meals of chicken for Shane and I with generous servings! Here's what I plan on making with all of this meat:

I hope I have encouraged and taught some of you how to get meat for less! It took about 30 minutes for me to cut up the first chicken (I had to watch a couple of youtube videos to figure out what I was doing), but the second chicken took less than 2 minutes!